Home » DJIA Since The Great Depression, Our View 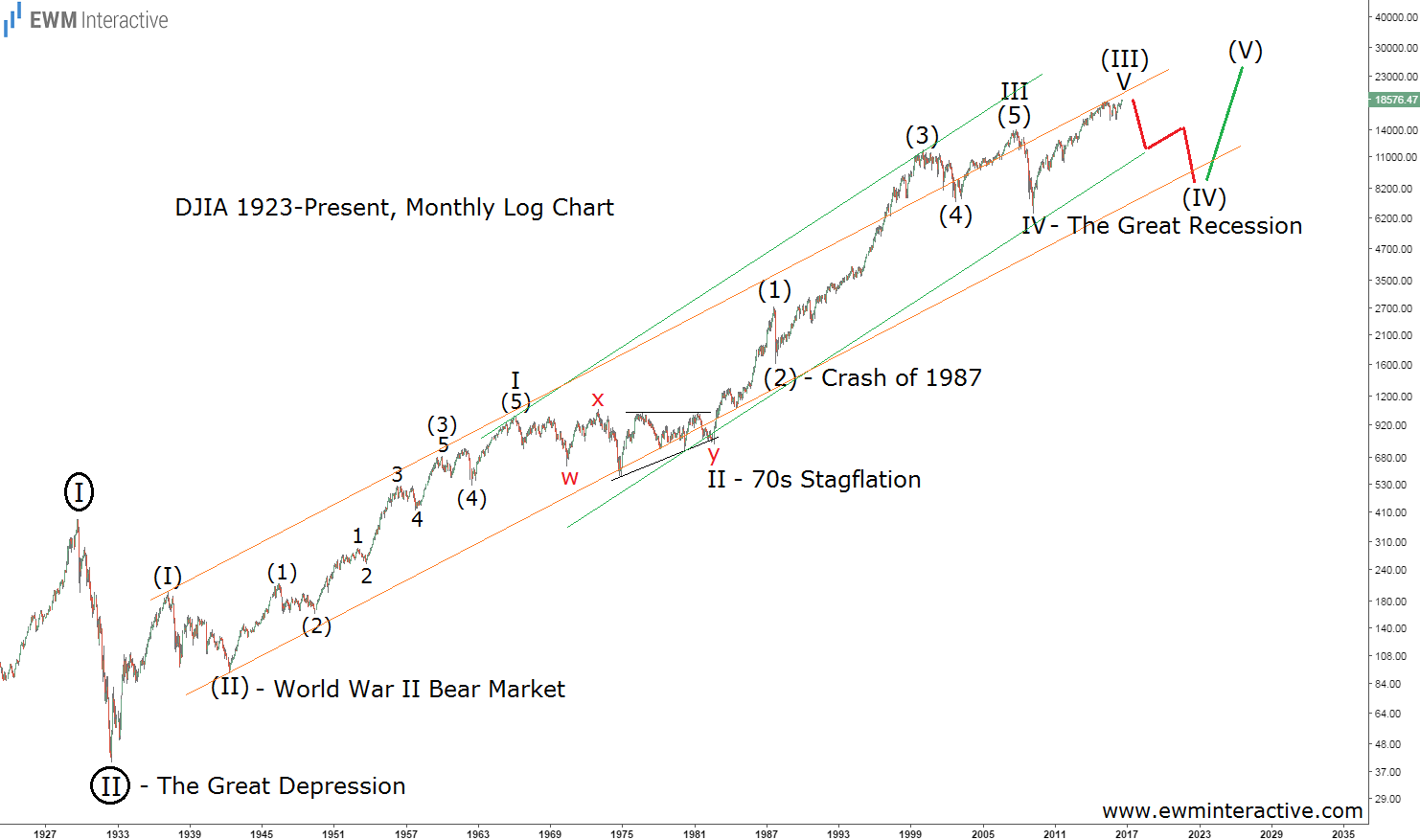 The financial world remembers the Great Depression of 1929-1932 as the most devastating period of the 20th century. Between September 1929 and July 1932, the Dow Jones Industrial Average (DJIA) plunged nearly 90%, from as high as 386 to slightly above 40. The crisis then spread to other countries before eventually taking over the whole world. And while the stock market bottomed out in 1932, consequences of the crash were felt for many years afterwards. But the development of the DJIA since the Great Depression is simply mind-blowing. Just imagine the uptrend from 40 in 1932 to 18 639 last week.

However, our purpose in this article is not to stand in awe of DJIA’s historical uptrend, but to analyze it through the prism of the Elliott Wave Principle, in order to get an idea of what might lie ahead. If you have been expecting just one single forecast, we are sorry to disappoint you. There are several possible counts. Here, we present three of them as most probable. None of them offers an immediate positive outlook, but let’s start with the most optimistic one. 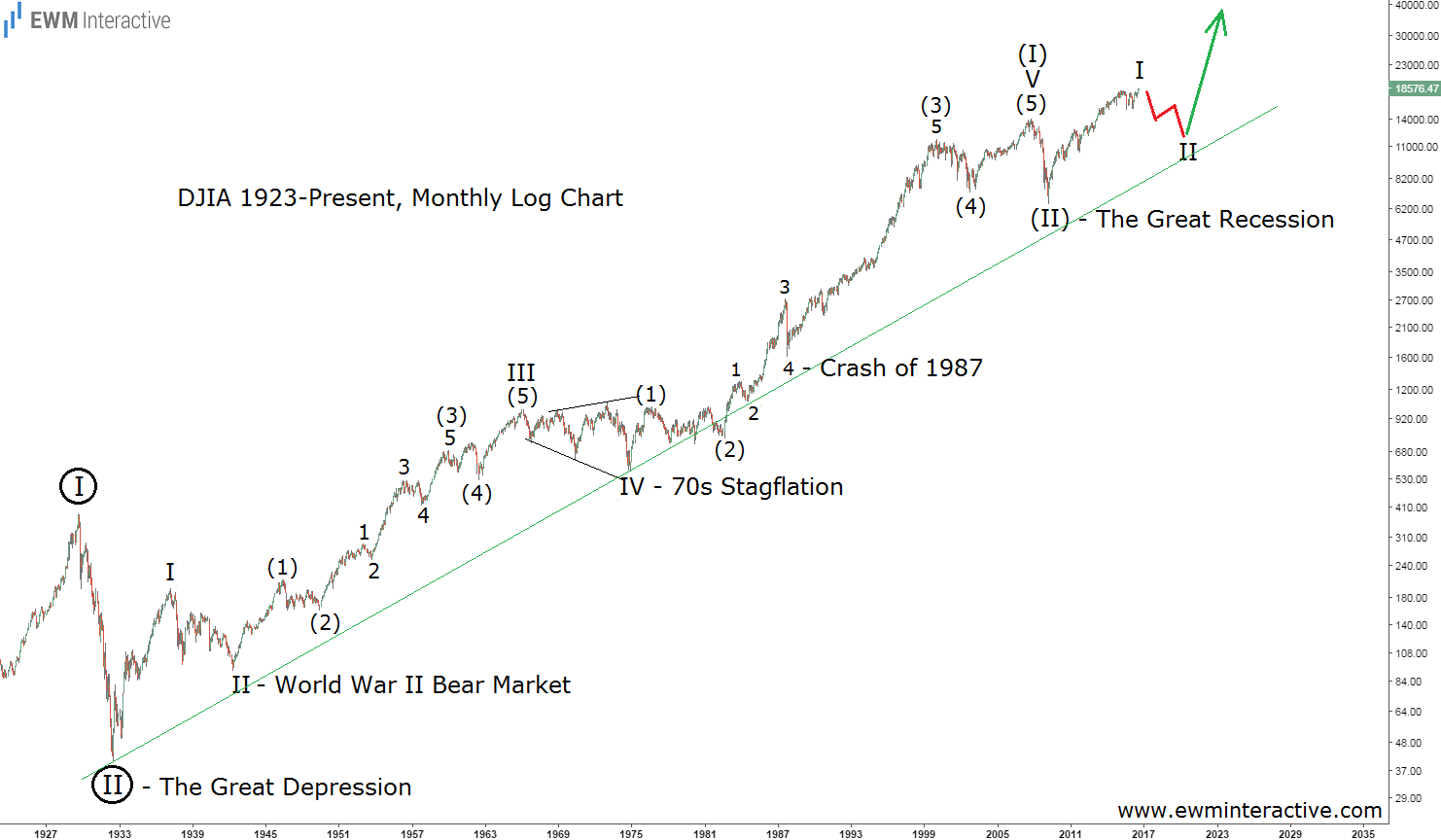 For the purposes of analysis, we have used a logarithmic price chart, since that is the only way to see the entire wave structure since the Great Depression. The chart also shows some of the other difficult periods the DJIA went through during the 20th century, such as the bear market during the Second World War, the Crash of 1987 and the Great Recession of 2007-2009. As visible, they could all fit into the count as corrections of prior impulse waves. According to the above-shown count, the advance between 1932 and 2007 is one giant wave (I), where the bear market of World War II is wave II, while the 1970s stagflation is an expanding triangle in wave IV. If this is the correct count, the DJIA has a bright future ahead. The Crash of 2007-2009 is supposed to be wave (II) of III-circled, which means the most powerful phase – wave (III) of III-circled has just begun. We should still prepare for a significant pullback in wave II of (III) of III-circled soon, but it would be nothing as scary as the crash we witnessed seven years ago.
We hope the market would choose this scenario, but the next two alternative counts could be even more probable… and far more devastating.

Here, the 1970s stagflation is a corrective combination labeled as wave II of wave (III), while the last recession of 2009 is wave IV of (III). According to the rule of alternation, it makes sense, because wave II is moving sideways, while wave IV is a swift and sharp retracement. If this is the correct count, DJIA is now approaching the end of wave V of (III), which would mean wave (IV) to the downside could be expected. If we apply channeling technique to the chart, we see that targets near the lower line of the trend channel – between 10 000 and 8000 – are plausible for wave (IV). And if this outlook is enough to scare you, maybe you should not look at the next one at all. 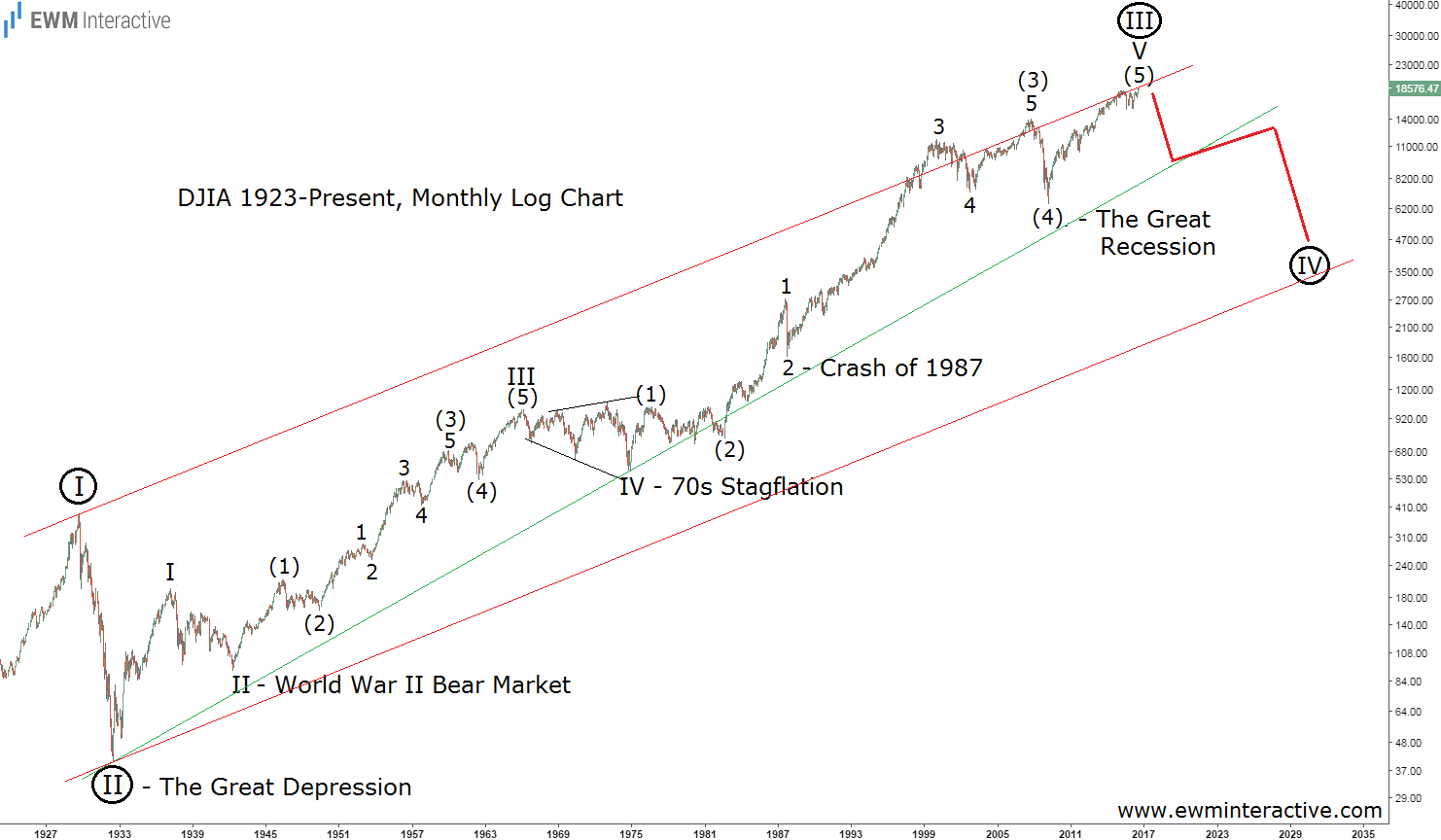 The entire bull market since 1932 could be over soon, if we assume the DJIA is currently trading within wave (5) of V of III-circled. This would mean wave IV-circled should start soon. The problem is that it is supposed to be of the same scale and magnitude as wave II-circled. In other words, similar to the Great Depression. If we use channeling again, it turns out DJIA might fall all the way down to the area between 5000 and 3000. If this is the correct count, it would be a nightmare. Let’s just hope it is not.

But no matter which of the three counts the market would choose, it is important to see what is left of the recovery since March 2009. In January 2016, we published “DJIA And Why You Should Not Worry… Yet”. By the time of writing, the index was trading below 15 700 and many analysts and experts called it the start of a new bear market. We did not. The next chart shows why. 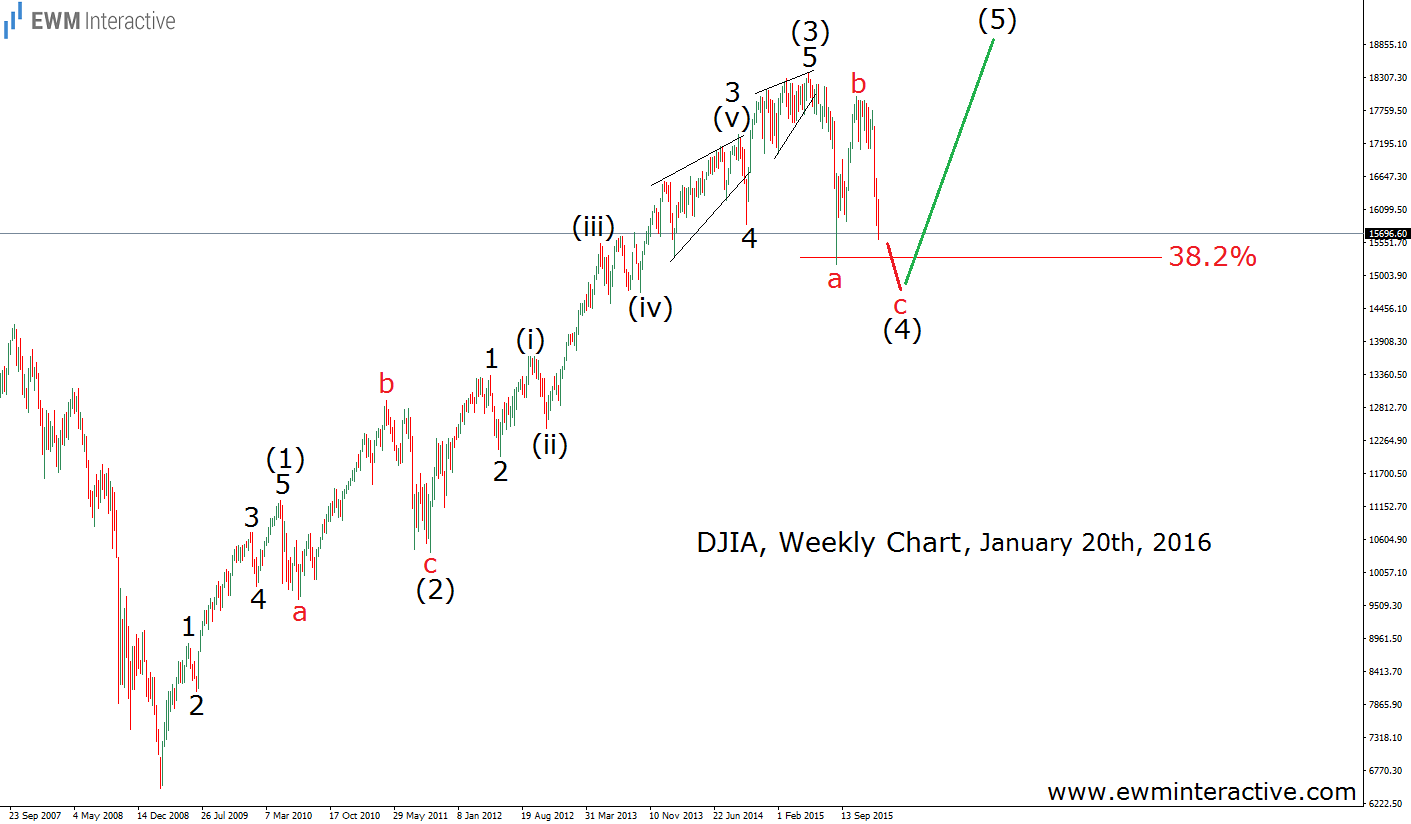 Because the Elliott Wave principle allowed us to turn the noise down and prepare for the resumption of the uptrend. “Instead of panicking, investors should prepare for the return of the bulls in wave (5)” was the very last line in the article. And if investors should not have worried about the DJIA at the start of the year, eight months later they definitely have a reason to start doing so. 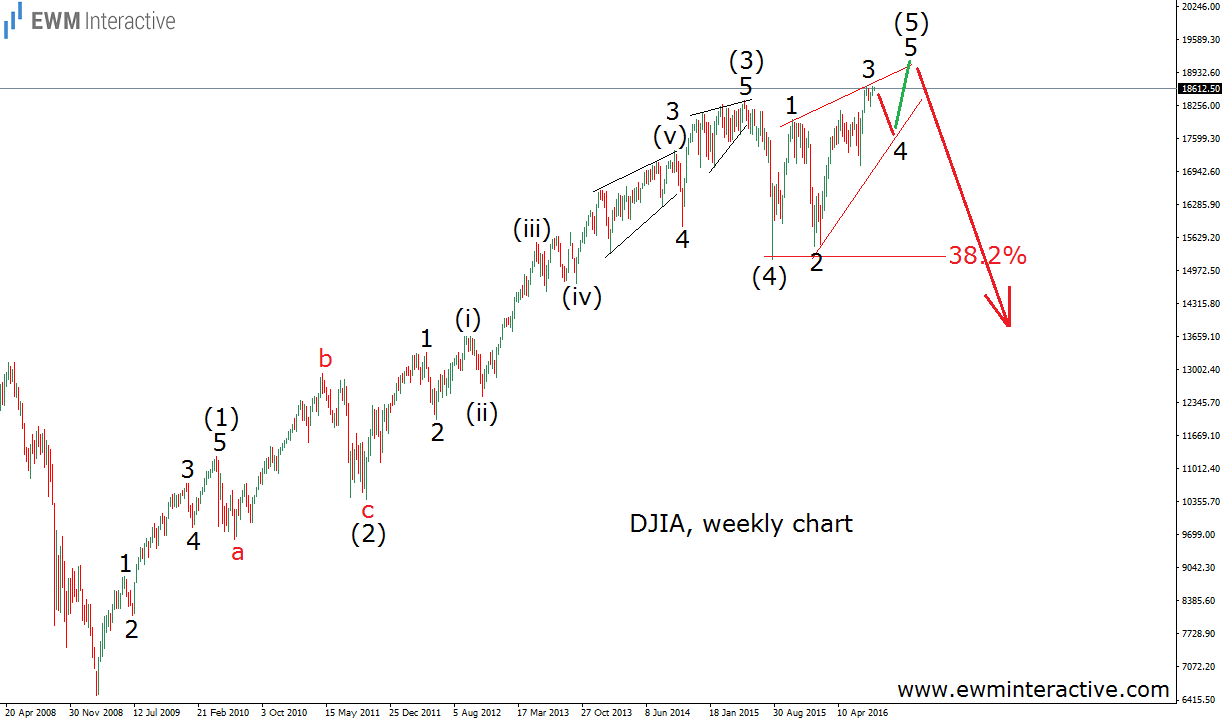 The DJIA started climbing almost right away. By July this year it had already reached a new all-time high and has been adding to those gains ever since. However, as the last chart depicts, the index seems to be dangerously close the end of the journey. We would probably see a couple of new highs, but once the assumed ending diagonal in wave (5) is over, the bears would be eager to return.

It is up to the market to decide, but even if it picks the first and least gloomy count, it still does not seem to be the time to put your money in the Dow right now. This is our opinion. Let’s see what happens next.

What other markets are you interested in? Prepare yourself for whatever is coming. Order your on demand Elliott Wave analysis now or pre-order one of our 8 Premium Forecasts due out every Monday. Stay ahead of the news in any market with the Elliott Wave principle.

S&P500 analyses are included in the EW Pro subscription.

The SP500 retreated by over 2% yesterday, making investors wonder if the bear market has resumed. From an Elliott Wave point of view, the...

The SP500 climbed sharply yesterday, but the futures point to a drop of similar size today. Is there a bottom in sight for the...

The SP500 retreated by over 2% yesterday, making investors wonder if the bear market has resumed. From an Elliott...

The SP500 climbed 3% on Friday alone and finished the week 6.4% higher. Does this mean the bear market...

The SP500 climbed sharply yesterday, but the futures point to a drop of similar size today. Is there a...

A recession seems inevitable as the Fed is behind the curve again. Global markets, the SP500 included, took a...

Stocks are officially in a bear market with the SP500 down by 22.5% from its January record. Today's Fed...

May's inflation was higher than expected which spooked the stock market once again. The SP500 lost over 5.6% last...

Given the plethora of macroeconomic worries ranging from the war in Ukraine, Covid-19 supply chain issues, high inflation and...